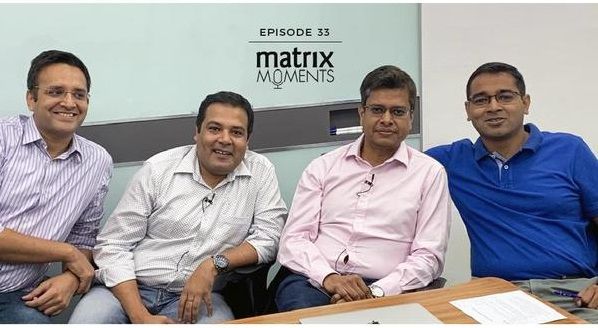 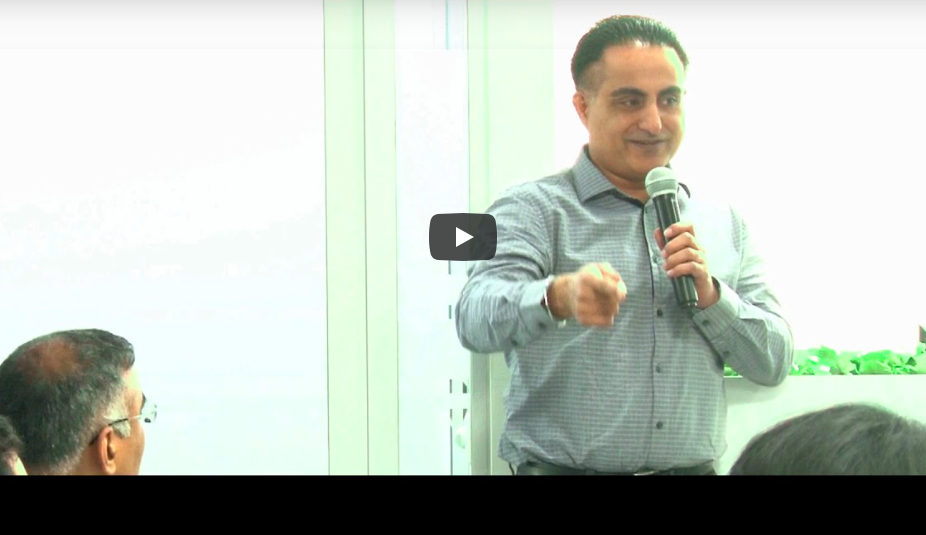 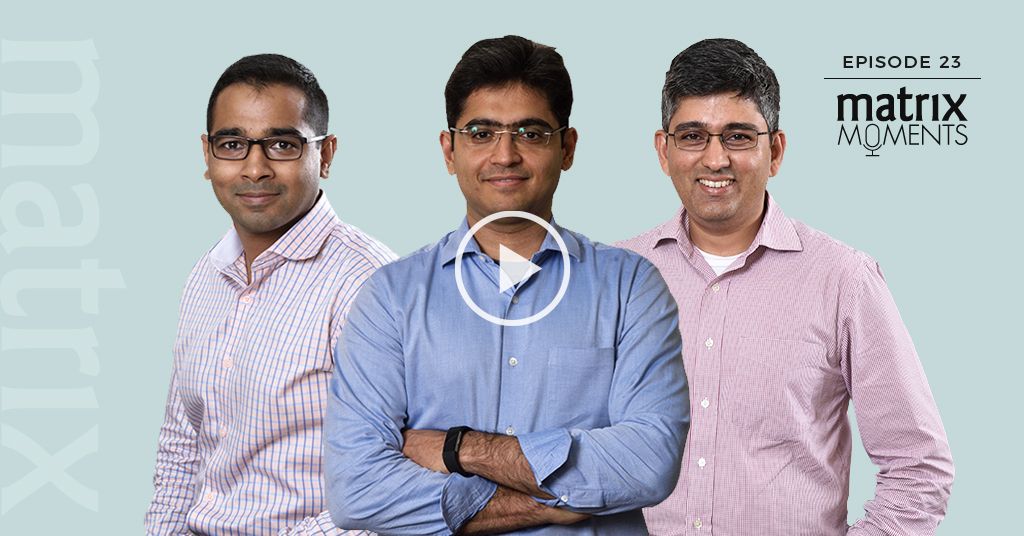 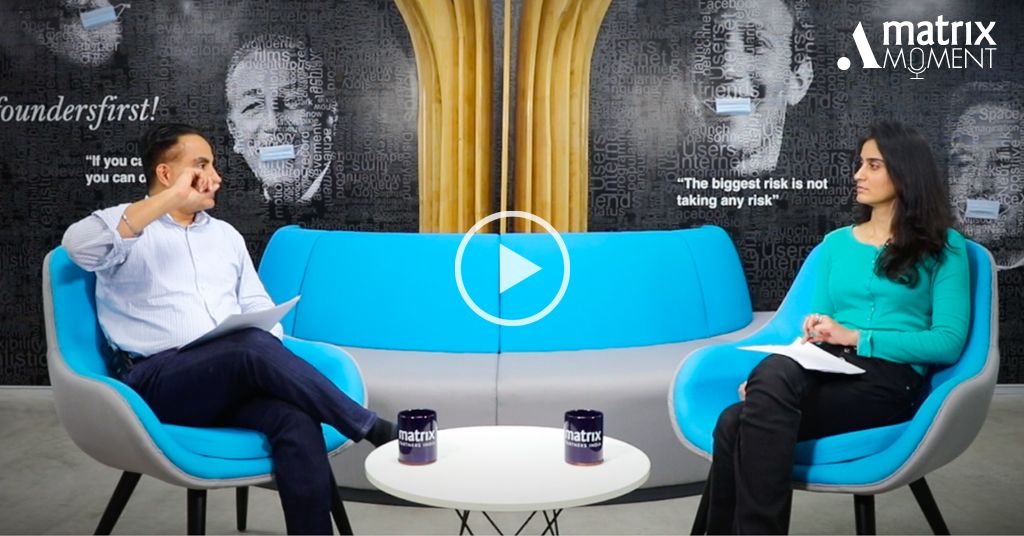 Sanjot Malhi: I think with all our investments, we are very very founders first. So, it’s team first before anything else. It’s also our Wi-Fi password if anyone wants to it. But that’s the most important thing. But then to Anand’s point, I think beyond that, we do look at three other things. One is market. Second is product. And then, the fourth is the business model. And I can quickly cover each of these. I think market is important because as a large VC fund, we are a $300 million fund, a fund III. We do look for deep markets. That’s the only way we make our returns and there has to be a large addressable market.

Now the question is how does one define a market because lot of these businesses that you guys are creating are disruptive in a manner. The way the markets are defined today may not be how they are defined tomorrow. So, it’s a little bit of a chicken and egg problem. But I think the most important thing to prove from a Seed to Series A stage is that there is a large problem that you are at least solving. Even if it’s not quantifiable in dollar terms, there needs to be a real problem that people are facing in this country that can be measured in some way. And therefore, the solution should be tied to that, which brings us to the second part, which is a product

Again, it’s very difficult I realize from a Seed to Series A within one year to be able to prove like this is an amazing product. Like that’s just an unrealistic expectation. But, I think my advice generally to founders is to take a microcosm of a large problem and prove in some way what we call product market fit. And that can be proven in different ways whether it’s customer cohorts. You can say my product for example is targeted towards middle aged women. So, then you pick up middle aged women in sub geography, small town or village or whatever and say, these people are loving my product. They are spending 50 minutes – 40 minutes on this product a day. The retention is through the roof. So, even if you are not solving the whole thing, all of India within one year, which no one can, you can show that this product works for your addressable market in a very very small way in some microcosm of that problem. So that’s very broadly about product. And we can speak about metrics and so maybe in the breakout groups.

And then the final part, I think the business model is something that at Series A stage I don’t think has to be fully proven. That is a risk I think we are willing to underwrite that if there is a large market and there is real product, the business model, I think we can figure out over time. So, revenue and profitability certainly is not something we are looking at at that stage.

Seed versus Series A: how we think about investment across stages.

Tarun Davda:  I think at Seed at least the way we think about is it’s largely team plus idea. And I think that’s what IQ also will look for when they are investing which is, is this a good team and is this a good idea or large market. At Series A, when guys like us come in, it’s typically team plus idea plus some early PMF. If you are an enterprise company, do you have 5-10 customers who are sort of sticky and are liking your product? If you are a consumer company, do you have a few thousand B2C users who are willing to pay and use your product?

At Series B, it’s obviously the team plus idea is now there is some proof to the pudding. It’s not just a bet on paper. But, the team execution has started showing through. And then you are looking for a scalable PMF. You are looking for unit economics to have played out.

What we have started thinking about is given the nature of the business, which founder is the right founder profile? Shashank is a classic missionary founder. Main healthcare disrupt kar dunga, Practo.

How do you know when a brand is born?

Avnish Bajaj: What metric do you look at to say a brand is happening, which is also a proxy for consumer love. What is the percentage of non-discounted sales? If you do a little bit of a brand extension, does that pick up immediately? Obviously, same stores growth and cohorts, how many repeat purchases. So we are big believers of that philosophy, which I think Series A firm should be. I mean if you get consumer love like I said, I am a big believer in customer obsession. If you get that right, you will build a large business.

Discovering the right benchmark for your business.

Tarun Davda:  The other thing I would say is that as entrepreneurs always try and – a lot of founders we see get stuck in this local maxima problem like we were just talking about hyper local delivery which 3-4 years ago was extremely hot. And we looked at some of them very closely and fortunately I think decided not to invest. But that whole space has kind of imploded. And I tell you reason. If you look at at that time we used to have founders coming in and saying he is doing 10 deliveries per delivery boy per day, I am doing 11. Somebody else will say I am doing 14, toh mera business chalega. And we were like, boss, none of these dhanda bannewala hai because in China the same guy is doing 60 to 80 deliveries per delivery boy per day.

Now if you are stuck in that local maxima thing, he is doing 10 but I am doing 12, so I am better, it’s all irrelevant. It doesn’t matter. Even if you are doing 15, it doesn’t matter. Because for the business model to work, you need to do at least 40, 50 a day, bare minimum. And to make money, you have to do 60, 80 a day, which is what companies in China are doing.

Now what is the reason for that comes down to density. If you look at the density of sort of population in India, significantly lower versus China where in the same housing complexes like 10,000 apartments because they have got the high rises. And I think that’s what it comes down to, which don’t [indiscernible 0:06:55]. The metric itself to me is less relevant. Knowing what you are measuring and knowing what is the right benchmark for that metric is what I – it is the way I look at it.

How we evaluate non-tech Consumer brands.

Sanjot Malhi: The framework is still similar. I think we still want to be in deep markets and there fortunately the markets are generally a little bit clearer than some of the say media social type of businesses, but that’s well known. So you look at fashion, you look at food and beverage, you look at personal care, all fairly deep markets. Low organized retail, low brand penetration. So, they are right for disruption in some manner or shape.

I think the issue with consumer brands like you said is A) Still a large part of the market is offline, which means that for funds like us, the nonlinearity of growth may or may not exist. Or, is unclearer than some of the other businesses. And B) Connected to that, the capital efficiency of those business is also questionable.

Now, neither of those questions can be answered at a Seed or Series A stage with data. So, you sort of start going higher up in the P&L or looking at some proxies for that data. So one thing that we look for is business that are built around some sort of product specialization because what that ensure is that in most cases that product will have a high gross margin, which again in turn really affects your capital efficiency down the line. Because what is capital efficiency? It’s return on capital invested, which to a large extent is related to profitability.